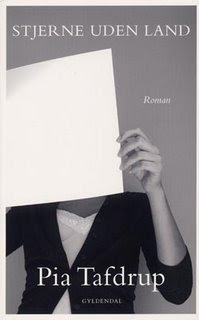 Star Without Land (Stjerne uden land, Gyldendal, 2008) is Pia Tafdrup's second novel. We present some excerpts from the early part of the book.

'It was the sight of me that made him cry,' says Rebecca, who is sitting opposite. 'That's what the woman on the plane said.'
Rebecca catches my eye, searchingly. Follows me closely as though she wants to be sure that I'm listening.
'You can't just go on reading when someone's crying, can you? Not even if it's a stranger. I’d carefully asked the woman who sat next to me if there was something wrong with the man. Even though she spoke the words clearly, I couldn't work it out when she replied that it was because he’d been looking at me… It wasn't fear of flying, it wasn't physical pain, it wasn't ordinary desperation. I evidently had an effect on that man that I wasn't aware of.'
Rebecca shakes her head. She doesn't give me time to say anything, but I think my own thoughts.
'I was immersed in Camus, Sophia. I'd been one of the last passengers to step on the plane, because I'd been sitting at the departure gate finishing the first chapter of The Plague. I stuffed my coat and backpack up in the luggage rack and then flopped down into my aisle seat. I immediately started on the next chapter without really noticing the two people who were already sitting there.'
She gives a wry smile.
'I hadn't taken any of it in, but I suddenly noticed the man in the window seat…'


Even when Rebecca was still down at the front door asking for Andreas Falkenland because she didn't dare to ring the buzzer, I found her worthy of note. I’m not in the habit of inviting just anyone into my apartment without knowing who they are, but she appealed to something in me that I didn't have time to reflect on. I offered to talk to her one day, if she felt that she needed that.
So now she is here. I have an article about the changed consumer habits of young people which, though it's rather irritating, will have to be revised again, and an interview with a young man who has enlisted as a soldier. The latter I shall cut, but for once a deadline must be a deadline.
Rebecca declares:
'You look worried.'
'Do I?… Listen, would you like a cup of tea?'
'Tea would be great.'
When I enter with the teapot, she is sitting quite still, non-committal.
'Would you like something else as well?'
'No, thanks. Do you have any honey, though?'
I fetch the honey and watch her take her time as she stirs the glass mug in which the amber-yellow clump dissolves.
Then she asks:
'What do you do, actually?'
Has she been able to read my thoughts in advance?
'I'm a journalist.'
'How exciting!'
'I'm really just a spectator by profession. The job is a bit overhyped. Practically every crime novel nowadays has a central female character who's connected with the world of the media.'
'Perhaps that's because if you’re sitting on the sidelines of society it's always possible to uncover something important?'
'One shouldn't be too involved.'
'What do you mean? Isn't commitment a good thing?'
'Yes, but – for example – one shouldn't treat other people as game to be hunted. There are too many sadists in my line of work who are only too glad to see their victims suffer and who delight in thinking up the next step. One should deal with the story, but be aware of the victim's pain… It's people we're dealing with, after all.'
'Yes, of course…'
Rebecca looks surprised to hear my torrent of words. Why am I saying this, anyway? She asks me about my world, and I immediately launch into a scathing critique of it.
'What was your last piece about?'
'It was an article about how young girls are increasingly resorting to violence. They attack one another physically.'
'I recently heard of a girl who worked off her aggression by doing prone rifle practice.'
Rebecca mimes the action of firing a rifle, and continues:
'I don't know if it helped to cure her self-hatred. Girls like that come across as self-assured and in control, but they bite their fingernails and fight one another to for attention. Oh, they ignore me in town!… And what about the article before that?'
'The one before? It was an interview I did with the author of the books I Told You So and Men Aren’t What They Used To Be, a raving mad woman of my age who believed she was right, no matter what she said or did. Wearing everyone out, and a parody of my generation.'
Rebecca giggles.
'And what else?
I shrug my shoulders slightly. Why are we talking about this? After all, it's Andreas she really wants to meet.
'Just now I'm working on an interview with a young man who is so tired of sitting at the checkout in a supermarket that he's signed up for the army so he'll be sent abroad to a war zone. He’d rather risk losing his life than be bored.'
Rebecca shakes her head, setting the dark mass of curls in motion. She has a high forehead. A forehead on which a small wrinkle appears now and then when she's surprised or worried.
When she pressed the buzzer of the door phone, I was about to cast a glance at the mail I’d pushed to one side during the last few days, because a normal working day eventually becomes so abnormal that there is no time for oneself. But there was nothing interesting. No one who wanted anything from me except to make me pat what I owe or tempt me with more offers. I had stopped in the middle of my work when someone down in the street shouted so loudly that I had to go over to the window and see what was happening. An elderly woman was walking along stooped forward, as though she were fighting her way in the teeth of a gale. She was shouting right and left, ranting and raving. Apparently not at anyone in particular. At life, perhaps? People were trying not to notice her. After she passed, one of them turned and watched her as she went, as I was doing from behind the window pane up here. I didn't have the energy to return to the articles at once, so I put the computer on standby and began to examine the pile of mail instead.