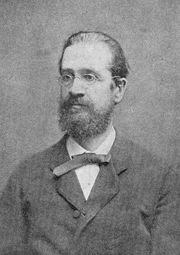 Some days ago I wrote about the resident of Viborg, Jac. Ahrenberg, who had written a series of biographical sketches in Swedish about people he knew personally. Here are a few excerpts from his article (1914) about Julius Krohn. Krohn (who may well be a distant ancestor of the Finnish poet Leena Krohn) was an ardent proponent of the Finnish language. But at home he spoke German and Russian. Like Snellman and Mannerheim, some leading Finns did not always speak Finnish well! But Krohn persevered and became a revered promoter of Finnish.

For a translator, it is important to know which other languages are spoken in any given area; background languages, in other words. As Viborg (aka Viipuri and Vyborg) was very cosmopolitan, there are plenty to choose from. Areas of mixed language have fascinated me for a long time. And mixed language implies mixed background.

But first a few words about the family history of the Krohns. Three families came to Viborg in 1814 from Rügen, on the Pomeranian coast, then part of Sweden: the Sattlers, the Bützows and the Krohns. Julius Krohn’s grandfather, Abraham, came in 1795 to Saint Petersburg on a Swedish passport, and began to work there as a baker and brewer. In time, he managed to acquire a plot of land at the end of Nevsky Prospekt. This global thoroughfare stretched, during the reign of Catherine II, out to where Gostinni Dvor and the arcade now stand. When the street was to be lengthened and widened, the value of plots of land rose enormously, and this was the basis of the large fortune that the Krohn dynasty managed to amass.

Abraham Krohn had several children, two of whom moved to Madeira in order to improve their weak health. They started the world famous wine company called "Krohn and Brothers". The next youngest, Leopold Vilhelm, moved to Viborg, applied to become a Finnish citizen and became one from having been, via Russian citizenship, a Swedish citizen. He married the eldest daughter of a businessman called Dannenberg (who was married to the daughter of a Finnish clergyman from Ingria or Ingermanland) who was, by the way, a very eccentric gentleman. He was very musical, and occupied his time, among other things, with building sounding boards made of glass (from Rokkala foundry) for the fortepianos of the day, whose sound was rather weak; and also with chemical experiments. All these experiments were inherited, on his death, by his son-in-law, the incredibly many-sided genius Johan Gabriel Fabritius. He wasted a good deal of his inherited Dannenberg fortune on them.

Dannenberg owned Kiiskilä manor, whose main building (karaktärshus) was nearer the road to Helsinki than the present one. The original house is still intact and is now a tavern. (...) The Dannebergs spoke neither Swedish nor Finnish. Nor have I heard the Krohn couple speak a word of Swedish. The mother-tongue of their son Julius, as was often the case in the upper circles in Viborg in those days, was Russian and German. [Julius Krohn was named after his mother, née Dannenberg, who was called Julie and inherited the Danneberg property. Julius Krohn went to school in Viborg.] Whatever language you would hear him speak later in life, you could always hear the soft "y" and "s", which reminded you that he had had a Russian nyanya (nanny). As a boy he was taught by Russian, then German, then French tutors, and when he finally decided to go to school in Viborg, the Swedish language was added to these. (...)

Julius Krohn grew up at this crossroads, Viborg, where three races, Karelians, Slavs and Scandinavians, had fought for space for over five hundred years, in this language chaos, with German, Russian, French, Swedish and Finnish. He did not have one drop of Finnish blood in his veins, even though he became a fiery fennoman. (...)

The Swedish language had gradually found a foothold in two of the exceptionally good German schools in Viborg. The Swede, the outsider, had gained the upper hand regarding the church and the legal system, which had always been German up to then, so that Mrs Julie Krohn became an enemy of the Swedish language. Like many others, she regarded the German language as representing a higher form of culture. But these people were not afraid of all change. The language of the people in the area was the Karelian dialect of Finnish, of which Julie Krohn did have some knowledge. She, like many others, presumably wondered what the fate of the people of the Karelian isthmus would be once the Russian language, which was spreading beyond Saint Petersburg, pushed out the two languages of culture, German and Swedish. Presumably things would end up as they had done in Ingria. One should not forget that the Finnish language was once spoken right down as far as Nizhny Novgorod. Julius Krohn’s fennomania had increased subconsciously by way of his mother’s opinions and, I wish to express myself as mildly as possible, her lack of sympathy for the Swedish language. (...)

The language question is a question of emotions. Emotions are the bastion of conservatism, inaccessible to violence, power, and, yes, even to common sense. Feelings are untouchable... The fact that I [i.e. Ahrenberg himself] never joined the Finnish language camp was not only a matter of temperament. I have never – and I must say unfortunately – regarded the Finnish tribes as having the capacity to form a state. What exists now is a result of what once was, and what was then supports my case. There has never been a Finnish state. (...)

We all (i.e. the Ahrenbergs) spoke Finnish at home, even my father – although his Finnish was rather like that of Mrs Julie Krohn – and we often made fun of him. But now we had to start writing the Finnish language ourselves. My brother immediately picked out an illustrated Negro and Indian book in order to translate it. I, who tended to revolt more, tried my level best to avoid having to do such things language exercises at all. (...)

The plots of land around Viborg had been divided a long time before by the land assessor, so that everyone would have "forest for fuel and timber" as well as "a beach for fishing". Both Vainikka (the Ahrenbergs’ manor) and Kiiskilä (the Krohns’ manor) consisted of kilometres of land in broad rectangles right into the ancient forest of Mustakorpi. The forest part of Vainikka was some 7 kilometres in length. On the other side, and at an equal distance from the main plot, we owned two rocky islets, the so-called Neulorna "The Nails". You had to sail a long way through the sound in order to reach what we called "our property abroad"; and because of the crosswinds, this could be quite a hazardous enterprise.