The Taste of Steel and The Smell of Snow 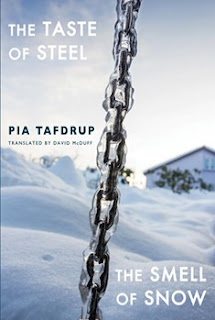 My translation of Pia Tafdrup's collections SMAGEN AF STÅL (2014) and LUGTEN AF SNE (2016) is scheduled for publication as a single volume by Bloodaxe Books in November 2020:

https://www.bloodaxebooks.com/ecs/product/the-taste-of-steel-the-smell-of-snow-1242
Posted by David McDuff at 10:09 No comments: Links to this post 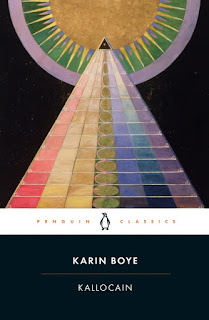 My translation of Karin Boye's novel Kallocain is now published in Penguin Classics.
Posted by David McDuff at 11:20 No comments: Links to this post 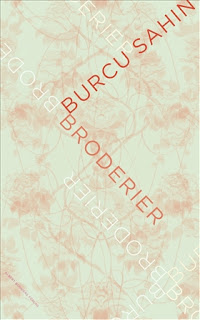 Burcu Sahin’s debut collection Broderier [Embroideries] (Bonniers, 2019) is a book about the relation between language and reality. In her delicate but severely crafted poems she weaves the fabric of her world into a verbal tapestry that is not only a record of her personal experience and memory but also a shared testimony, a voice that she gives to women whom society has rendered silent. It is also a remarkable addition to the steadily growing body of work by poets for whom Sweden is a base, but not necessarily a home:  they include such names as Athena Farrokhzad, Yolanda Aurora Bohm Ramirez, Annamarija Todorov, Johannes Anyuru and Felicia Mulinari.

The reality that underlies the poems is not a cheerful one. It is a place of exile and exclusion, of exploitation and unrewarded toil, of social and linguistic isolation, of racism, alienation and anomie. Språket är inte glömt/ men raderna är brutna (The language is not forgotten/but the lines are broken) reads one of the early poems in the collection, and in their bare, sparse outlines and arching fragments the poems themselves reflect this statement. At time there is a danger that the link between language and reality may be lost altogether:  det finns ingen försoning i verkligheten/ kanske i dikten/ det finns ingen försoning i dikten/ kanske i verkligheten (there is no reconciliation in reality / perhaps in the poem / there is no reconciliation in the poem / perhaps in reality) is the warning that runs through much of the volume.

In an early essay, Sahin writes of the political nature of poetry:

For me poetry is always political. Literary space and writing do not escape social norms and structures, but are a part of the reproduction of images, stories and people. Literature does not just reflect “reality” but recreates it anew.

The book’s political dimension is reflected in its structure, which in turn relates back to social reality: the metaphorical juxtaposition of ‘stitches’ and poems persists throughout the six sections, and the fragmentary  and arduous nature of the working women’s daily lives appears in the isolation and fractured appearance of the lines on the printed page. There is a constant play on the words söm (seam) and sömn (sleep), and thematic devices of this kind are skilfully interwoven in the text.

A great deal of the anger in the poems is directed at the brokenness of the social surroundings, the inadequacy of language and the careless way in which generations are severed from each other, when the traditional roles of mother and child are reversed:

there is no word
for a child
that carries
its mother

The experience of exile and the task of establishing a life in a new and unfamiliar country is encountered in the learning of words:

with a cleft tongue we learn
the language
the letters’ pronunciation

But the acquisition of new words and gestures is accompanied by a raw sense of vulnerability as an outsider and by a resentment of intrusion:

we learn to pluck
the gazes of others
from our faces

The poet is not alone – she stands with her mothers and sisters, fathers and brothers, in a strange new world where objects and words have lost much of their connection, and where human relations are restricted and determined by the need to survive by backbreaking toil. The hidden world of the textile sweatshops is invoked in cinematic flashes:

Contrasted with the mechanised and alienated environment of exile is the world of tradition, of roots and family. In the poems this is centred on the theme of motherhood, and the image of the mothers and grandmothers. There is humour here, and tenderness, mixed with irony: våra mödrar syr / vårdar andras mödrar (our mothers sew / take care of others’ mothers), the first poem in the ‘Night Shift’ section begins.

Although the poems are phrased with the techniques and stylistic features of modernism, they are also direct, down-to-earth statements about real and lived experience. The poet speaks for whole generations of uprooted people, surveys the world that is partly their own and partly given to them, and praises the richness of their inborn and self-creating culture in the face of an uncomprehending and largely hostile environment. But the future is bleak, and does not hold out much hope for the prospects for social integration and harmony in a West that is rapidly changing, conscious of guilt, but still fettered by its history of domination and injustice:

what exists is an open hand
that never stops giving

Sahin’s is an original and uncompromising poetic voice, and one looks forward to following her development in future collections.
Posted by David McDuff at 10:05 No comments: Links to this post


There are no clouds over Plovdiv
today. They all followed Orpheus

down to the dark where they were late
for the concert. What should they do?

The door to the music was closed. Or-
pheus, Orpheus himself sounded like

an echo you could hear but faintly.
There was scarcely room for them

all in this uppermost part of the under-
world in which they had landed, just

like a flock of desperate refugees
before a bristling barbed wire fence,

so did they huddle together not knowing
inside from out. Here the transformation

took place: the clouds flowed like water
down to the underworld, making chaos

and mud. For a long time, Orpheus kept
his singing head above the hazardous

mud, but his mouth was filled,
his eyes and ears, and when at last

through the mud he heard the beloved’s
whisper like a strangely bubbling sound,

it was too late. Too late is the not
so cheerful motto of this story.

translated from Danish by David McDuff

Posted by David McDuff at 15:29 No comments: Links to this post 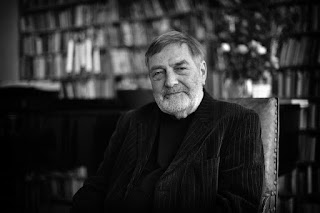 Hufvudstadsbladet has an obituary of the poet, psychiatrist and politician Claes Andersson, who recently passed away at the age of 82.

Posted by David McDuff at 18:12 No comments: Links to this post 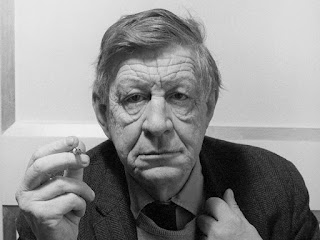 On learning and not forgetting

When they asked W.H. Auden if poetry can change
society he said no, can poetry change human nature,
No said W.H. Auden. But then what can the poems
do? Allow us to commune with the dead, said
W.H. Auden, remind us to enjoy life a bit or at least
endure it a bit better, keep us company for a while. 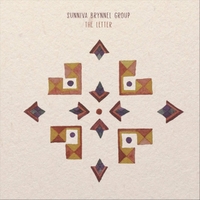 Sunniva Brynnel Group continues to develop and evolve, with a new album that marks a further step along the road from the Blue Ejder album and its settings of poems by Karin Boye. The album was recorded in NYC and features jazz musicians from Canada and the U.S., including Nathan Reising on alto sax. There are a couple of new Boye settings here, in my translation. In general the tracks in the album present an interesting blend of folk style and post-Coltrane improvisation and harmony, where voice and lyrics are fused with the work of the instrumental ensemble.
Posted by David McDuff at 18:30 No comments: Links to this post 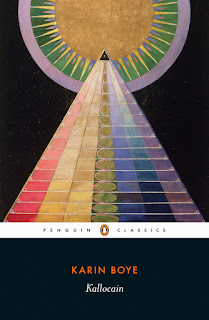 The cover of my forthcoming new Penguin Classics translation of Karin Boye's dystopian novel Kallocain. It's a work by Hilma af Klint (1862-1944), a Swedish artist who created some of the very first purely abstract paintings - before Kandinsky.
Posted by David McDuff at 17:08 No comments: Links to this post 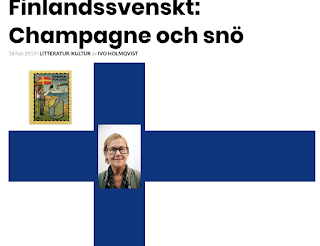 On the occasion of Tua Forsström's election to the Swedish Academy, Opulens has a series devoted to contemporary Finland-Swedish writing. Authors profiled so far include Tuva Korsström and Merete Mazzarella, and there are apparently more articles in the pipeline. Series editor Ivo Holmqvist has some wry historical notes on the Finland-Swedish presence in the Academy:

On the outlook for the newest Finland-Swedish member, Holmqvist is encouraging, though he can't  help pointing to some of the commentary that has greeted the latest appointment:

Posted by David McDuff at 15:17 No comments: Links to this post

I’m the only person
in the whole world
who sees the world
with my eyes.
And now I see
myself see myself
almost as a kind of
central heating system
with pipes and thermostats,
calcifications
and insurance policies
where everything
is written in small print
in medical Latin.

I see myself
see myself
as a chemical factory
with a built-in power station
and without exaggeration
a lot of electronics.

I see myself
see myself
as a very
advanced computer
which is rather primitive
in certain respects.

I see myself
see myself as
an investment
and an investor,
sohelpmegod
as a market,
whimsically logical
swinging
from one form
of hysteria
to another
and back again,
forced against
an equilibrium
that is impossible.

I see myself
see myself
as a bank.
But how could it
go so wrong?
And can it happen
again? Here?

I see myself
see myself
as a small
and yet dizzying
swarm of small devils
that hide
behind one another
when they realise
they are being seen. Easy,
take it easy, say the
ones in front that are the
smallest, while they
swarm away, easy now.
There is no reason
to exaggerate.
Absolutely no reason.
A little smile is enough.

But I don’t recognise
the eyes that see me.

(It must be both
complete and incomplete,
says the spin
doctor, but
it’s all very well for him to say so
sitting there
in that rain-sodden tree
advertising
himself
with his yellow beak.)


PORTRAIT OF A FULL STOP

In the dark-light I stumble into the light-dark
and hit something soft, the darkness falls,
I’m covered by a fur coat of light. Here

you can reflect that what you say
may end up in a poem, and if you can’t
recognise it at all, what then?