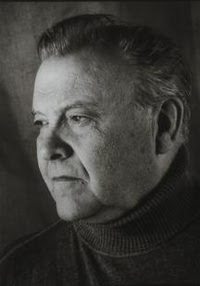 I recently discovered the website of the Icelandic poet, journalist, novelist and playwright Matthías Johannessen, who for 40 years was the editor of Iceland's main daily newspaper, Morgunblaðið. I met him and talked with him in the late 1970s. When I found the site I was surprised to find that there he has stored the entire enormous volume of his Diary, which he began in 1955 and has continued more or less without a break until the present day. For anyone wishing to learn about the history of Iceland in the 20th century and indeed about the history and culture of Iceland in general, this is a valuable resource. The site also contains poems, essays and interviews.

Recent posts to the Diary include a reflection on the historical, social and economic issues connected with Iceland's newfound aspiration to join the European Union, and an essay-review on a new book by the Norwegian-French magistrate Eva Joly, who was recently employed as a special adviser by the Icelandic government to investigate the possibility that white-collar crime may have played a part in the 2008–2009 Icelandic financial crisis.

The subjects in the Diary range far and wide, and cover not only Icelandic issues but also most aspects of international affairs (over the decades the diarist interviewed an astonishing number of well-known political leaders, writers and intellectuals as, for one reason or another, they passed through his country). Readers may find that the views expressed quite often don't tally with their own, but the texts are always clearly-written and informative, and create a unique picture of how the world can look from the top of the globe.
Posted by David McDuff at 10:09

Seeing interesting things like that makes me want to learn to read Icelandic well. We didn't have it at UEA when I learnt Swedish, and obtained a reading knowledge of Danish and Norwegian with a minimum of extra effort. Obviously, a huge Diary like that is not likely to be translated into English in its entirety.

As for white-collar crime, I still wonder what exactly that father & son team who invested heavily in Russia were actually up to. Can't remember the names, but they stuck out among the rest when the crisis was in full swing. At one point, Russia was going to help bail out Iceland. I believe that the Icelanders have borrowed from Scandinavia instead. For Russia to get a foothold in Iceland would be a step backwards.

I wonder whether Iceland will ultimately plump for the EU and the euro, or whether they will ride out the storm on their own. They are surely most worried about having to share their fishing waters with EU fishing fleets. But the EU could prevent them from falling in future into the same chasm.

Anyway, Matthias Johannessen, one of those rare Icelanders with a traditional surname, looks like a major source of information about the feel of Iceland over the past few decades.

>>one of those rare Icelanders with a traditional surname<<

In the EU essay, he writes about his childhood in the 1930s, when "abroad" meant Denmark, and Danish was the first foreign language every Icelander learned.