Songs of One's Own 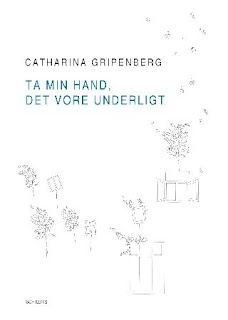 In the latest issue of the Finland-Swedish literary magazine Ny Tid, the poet Catharina Gripenberg talks to Katarina Gäddnäs about herself and her work. Here are one or two excerpts from the interview, in my impromptu translation:

Now Catharina lives in Amager, a district in south Copenhagen, near Kastrup.

“It’s not chic or trendy, and that feels good. Ordinary people live there, workers and all kinds of nationalities, people go around in shell-suits. And there are lots of bodybuilders with boxer dogs,” she says, puffing out her cheeks and mimicking a beefy style of walking. "There’s also a long windy beach you can stroll along. I like the thought that I live near an airport. Airports are a sort of no man's land where I feel as though I belong, they have departure gates that show the names of cities where you could also live. Your identity is more open at an airport, you don't need to have a home there, you’re on the way somewhere, you have a destination.

“Living between countries, on the borders, being in between or on the margins, can also be rewarding. A rootlessness that roots me deeper and deeper in writing.”

She also plans to look for part-time work, apart from writing.

“It could be anything, and preferably something that's not writing and literature. I think this is something I was brought up with at home, or perhaps it’s an Ostrobothnian trait, not being able to just sit there and think you’re a writer or some kind of artist all day, but feeling that you probably also ought to have a "real" job."

In her most recent poetry collections there is a swarm of different voices and pitches. The voice is important when she writes. She has always been fascinated by how people express themselves. How people present themselves through language, how one speaks to others.

“One starts to exist when one begins to talk, or write, it’s as though one were blowing life into oneself. Like in Beckett plays, where they talk and talk in order to come to the realization that they don’t know what to do, with life that’s silent and transitory. When I write, it’s often a voice speaking out, someone clearing their throat and starting to express themselves in an elegant, urbane sort of way, but the words come out of the corner of their mouth, trickling and oozing."

Catharina Gripenberg's latest collection Ta min hand, det vore underligt (Take my hand, it would be strange, 2007) has received several prizes and awards. The criticism was mixed, in particular one or two Swedish reviewers who said she had massacred Edith Södergran in some sort of act of matricide. I myself read the book as a dialogue with Södergran's work, a conversation with serious undertones.

"I'd never even imagined that anyone would read the book that way. Why would one write a book with the aim of massacring Edith Södergran, that just sounds sad ... To me my Edith poems are a conversation with her poetry, with the writing of poetry; how should one write nowadays? What is a poem? For me it was about turning to a master or myth from literary history who possessed a key to the poetic landscape, and about walking among her lines and poems as if through rooms, and touching objects and words and feelings. For me it's as if the poetic persona or the people in my Edith poems have read Södergran's poems, and are trying to remember them, as if they were trying to remember how to speak, how to write poetry, how to explain and describe. They're trying to build a life of their own, and they're using the poems of a master in order to do that, and then they climb out of those poems, and begin a kind of pilgrimage towards a poetry of their own and a country of their own, because they have to find their own songs."

As I, Eric, also subscribe to Ny Tid, I read that same interview yesterday. I was amused by her fantasy involving being photographed wearing a false moustache claiming that it didn't really make her look like man (as you can see the woman underneath), but it made her look like a spy. This is all part of the two-countries, rootlessness, debate she has with herself, no doubt.

One further bit in that interview I liked was when she said:

"The Ostrobothnian landscape means a lot to me. The flatlands, the prairie, the evergreen forest, the farms thinning out. This is often there in the wings when I am writing. Where you grew up also grows to form part of you. The word "meadow" means the meadow near my cousin's house, where we used to run around. And my real mother-tongue is Ostrobothnian dialect, and that will always be present beneath the words when I speak, so that Ostrobothnia will always live in my mouth."

But in order to become a national and international poet, Gripenberg has not written her poetry in that dialect which, believe you me, can be very broad indeed. So the hints are there, but they remain hints.