The Finnish State International Translator's Prize is an award that I never expected to receive, and it means a great deal to me. I would like to thank everyone who recommended me for it.

Many years ago I visited Finland for the first time, as a young Edinburgh University student of Russian: it was July 1966, and I was travelling along the Baltic by ship, with some friends, on the way to the Soviet Union. Disembarking in Finland for a few all-too brief hours, my first impressions were of the city of Helsinki, but what I remember most of all were the light, stillness and calm of the late summer evening that greeted me as I walked up from the harbour. It was a calm that I hadn't experienced in any other city I'd been to, and I remember wondering where all the people were, for at that particular time of the evening there was almost no one about. I didn’t know it then, but in the years to come I would make many more visits to Finland and meet many people there, both in life and in books.

I've spent a large part of my life studying and translating, for the most part, the literature of three languages: Russian, Swedish and Finnish (I’ve translated poetry and fiction from other Northern languages, including Danish, Norwegian and Icelandic, but the three languages I mention are the ones that have held the most significance for me). The choice may at first sight seem strange, yet if one looks at the map it does makes sense, as Russia, Sweden and Finland are close neighbours, and have a common, if not always harmonious, history – and that is the context in which I discovered them.

Although the three languages – Russian, Swedish and Finnish – are structurally and lexically quite different from one another, my university study of Russian and Russian literature (which I pursued to doctorate level) was accompanied by a study of German. This led me to learn the Nordic languages, including Icelandic at the University of Iceland in Reykjavik, and then some years later, with the encouragement of the Finnish Literature Information Centre – which is now called FILI – Finnish, first under Hannele Branch at London’s School of Slavonic and East European Studies, and later at the University of Helsinki.

In the late nineteenth century and during the early twentieth century it was not uncommon for educated people in North-Eastern Europe to speak, read and understand all three of my chosen languages, although nowadays the unlikeness of Russian, Swedish and Finnish is thought to make them mutually exclusive. That was not the case in the past, and the change of attitude may be due at least in part to political and socio-historical factors.

I put the emphasis here on “languages” rather than “countries”, for in my experience literature only rarely coincides with frontiers on maps: it exists not behind national boundaries but in language, and in a psychic and emotional space that is governed by the laws of reading and common fellowship. The novels of Dostoyevsky and the poetry of Baratynsky and Blok may tell us something unique about the Russian soul, but they also speak in universal terms. Likewise, the verses of the Kalevala and the plays of Strindberg tell us much about the psyche of Northern Europe, but they also draw inner maps of human consciousness, and of the unconscious. And indeed, in my years of work as a literary translator I have become aware that in literary terms the three linguistic cultures I mentioned tend to overlap with one another. The work of Edith Södergran, the first of the poets of Finland whom I endeavoured to translate, is one of the living confirmations of that.

My first translations of Finland's literature were nearly all of Swedish-language poets and authors, of whom there are almost more than in Sweden itself. Then I began to study Finnish, first at London's School of Slavonic and East European Studies, and later at the University of Helsinki. Through my own reading and my many years of contact with members of the Finnish Literature Centre and the editors of Books from Finland magazine, I developed a knowledge of both Finland-Swedish and Finnish literature. This was further helped by meetings and friendships with contemporary authors – especially the poets Gösta Ågren, Bo Carpelan and Tua Forsström, with whom I worked on translations of their poetry, learning an enormous amount in the process – and with their editors and publishers in Finland. My British publishers Penguin and Bloodaxe also gave me encouragement in my work as a literary translator.

In recent years I have been reading the Finnish poetry of the early twentieth century, and am surprised to learn how few of the poets who lived in that period are translated into English. So that is one of my projects both for the present and for the future: to try to make the voices of Saima Harmaja, Kaarlo Sarkia, Katri Vala, Uuno Kailas and other poets from that long-ago time heard in English, for they still have many things to tell us.

Again, I would like to say thank you for this award, which I’m honoured to receive: for me it’s a landmark in my continuing discovery of Finland, its people, and its extraordinarily rich and diverse literature.

Posted by David McDuff at 14:51 No comments: 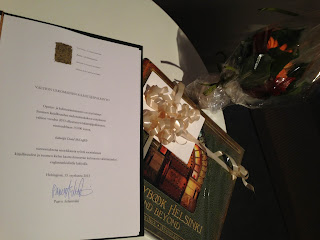 News from Helsinki that I've been awarded the Finnish State Prize for Foreign Translators.