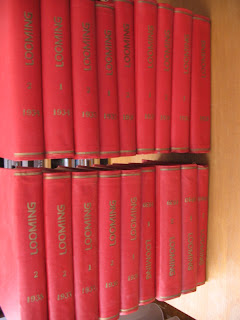 I happen to have the complete set of twelve issues of the Estonian literary magazine Looming for the year 1934. So over several blog articles, to make the information more digestible, I will highlight some of the contents of this magazine for that year.

Looming [pronounced: LAW-mink] was founded in 1923 by Friedebert Tuglas, as celebrated in other blog articles here. So by 1934, it was an established magazine. The covers of the 1934 issues had the word "Looming" (Creative Endeavour or Creation) in alternate black and red capitals letters, then an overview of the contents, in the same way as the Finland-Swedish literary magazine Horisont used to do in the 1970s and 1980s. Many of the editors and regular contributors were of a left-wing persuasion, social democrats for the most. These included the Modernist poet Johannes Vares, pseudonym Barbarus, who later committed suicide in 1946, after having been made puppet prime-minister of the Estonian Soviet Socialist Republic not long before; and Johannes Semper, who became the Minister of Education under the same arrangement, but survived. In 1934, these two were still very impressed by French Modernist poetry.

1/1934
Obviously, Estonian intellectuals of all persuasions had noticed the rise of Hitler the previous year. And Barbarus' poem in issue 1/1934 had echoes of a crossroads; Cain and Abel were mentioned, and the idea of blood-thirstiness. Johannes Schütz also wrote poetry there; he later Estonified his surname to Sütiste - and continued to publish poetry in Looming. Major Estonian prose author Eduard Vilde had just died the previous year; there were articles about his works, visiting his grave, etc. The issue is 116 pages long. In this issue, most of the poetry, prose and reviews are home-grown Estonian ones.

And the editors sent a questionnaire round to authors with three questions:

1) Towards which country's sphere of influence would you prefer we orientate ourselves? Where do you hope that impulses for our intellectual life will come from?

3) How desirable or undesirable do you regard the recent enforced cultural orientation in the direction of Germany or Russia for the future of an independent Estonia?

Sensible questions for the epoch, answered at length by three Estonians, author Bernhard Linde (47 years old), historian Peeter Treiberg (39), and poet and academic Gustav Suits (50). Suits, being a rather professorial type and a renowned poet, increased the number of questions off his own bat to seven. He ends his reply with:

7) A propos of Sweden. As we have such a clear tendency to cultivate Germanic languages and cultures, let us not forget the merits of the Swedish language and Scandinavian culture.

As the replies by these three are so long, I'll have to stop here and read them in detail. But suffice it to say that the Zeitgeist was very much in evidence!
Posted by Eric Dickens at 14:32

It wasn't much of a choice, was it? No wonder Swedish seemed attractive.

The bound photo is fine. I only have the latter half of 1934 in such an orange binding, but I hope I have given the idea that this mag was already alive and kicking back then.

As Estonian periodicals suffered mass destruction, as already described in the context of books and axes, anything still available is a miracle.

But what strikes me is that these issues from almost 75 years ago are not at all old-fashioned or stuffy. To me, Looming looked then like a lively mag, similar to international ones such as BLM (defunct, alas), Horisont, Vinduet, Nuori Voima, Parnasso, Hjärnstorm, Ariel, Lyrikvännen, 00-tal, Karogs, Die Horen, De Revisor, Deus ex Machina, Chapman, F-ART (don't laugh; this is a serious Polish mag), Nya Argus, De Tweede Ronde, London Magazine, Stand, Bzlletin, De Brakke Hond, Ons Erfdeel, Dietse Warande en Belfort, Revolver, and the presumbaly hundreds of other serious literary magazines, often produced on a low budget, from throughout Europe, ones that are not easily available beyond subscription, even in the best-stocked bookshops throughout that same region.

There aren't so many literary magazines of that kind still around in the U.K., are there? There are more in the U.S., where journals like Paris Review and Parnassus and smaller magazines like Absinthe are still active. The Literary Review recently published a large all-Danish issue. It really makes nonsense of the claims sometimes heard that U.S. publishing is basically hostile to translations.

Yesterday, while I was at work, my sister stole my apple ipad and tested
to see if it can survive a thirty foot drop, just so she can be a youtube sensation. My apple ipad is now broken and she has 83 views.
I know this is totally off topic but I had to share it with someone!