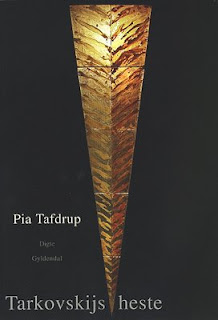 This is the cover of the original Danish edition of Pia Tafdrup's collection Tarkovskijs heste (Gyldendal, 2006), which I've translated into English, together with another collection of her poetry, Hvalerne i Paris (Gyldendal, 2002). Both translations are now scheduled to be published together as one book by Bloodaxe in January 2010, and I have a Bloodaxe contract, as does the poet herself.

The translations would probably have appeared some time ago, had there not been a) a disagreement with the publisher about whether the books should appear separately or as a single volume b) a long delay in the publisher's obtaining an ACE grant for the book (a grant from Kunststyrelsen has already been obtained) and c) a disagreement about the cover art.

Originally the Bloodaxe volume, which is to contain both collections and will bear the title Tarkovsky's Horses and Other Poems, was supposed to have the same cover art as the Danish edition pictured here -- and it was the cover preferred by Pia Tafdrup herself. But quite late in the proceedings, Bloodaxe informed us that this cover didn't suit their publishing style -- they wanted to choose another cover, preferably a frame from the concluding moments of Tarkovsky's film Andrei Rublyov (1966). We agreed to this, but negotiations in obtaining permission from the Russian film studio to use the image on the cover are taking a very long time.

It all goes to show, I guess, that the path of publication is not always a smooth one, especially where several different interests and agencies are involved. Translators often don't really have much say, the authors are more or less at the mercy of the (for them, foreign) publisher, and sometimes one wonders whether there might not be a simpler and more efficient way of delivering books to the public.
Posted by David McDuff at 08:32

You bring up a very interesting point about covers and control over them. The Danish cover looks very effective to me - and I note that the author liked it too. But when a book is translated, the cover doesn't often "travel with it".

When, for instance, the Viivi Luik novel "The Beauty of History" was first published, both the Estonian original and Finnish translation had the same illustration by a friend of Viivi Luik's, the important Estonian artist Epp Maria Kokamägi. Even the Dutch translation had a different, though similar, cover by Kokamägi. But translations from further afield did not always follow suit.

I had a hands-on approach to a forthcoming anthology of Estonian stories by Dedalus publishers, Sawtry, UK. I sent pictures by various Estonian artists by e-mail to the publisher, and after a little discussion, we decided on a painting by Jüri Arrak as cover illustration. (Also a living and easily accessible painter for permissions purposes.) But Dedalus is a small publisher. Bigger set-ups, such as Random House, want to use work by in-house staff.

The cover image for Tarkovskijs heste is a stained glass painting by Ida Balslev-Olesen, a friend of Pia Tafdrup's. Publishers seem to have a tendency to shy away from using graphic work by friends of the authors they publish, and prefer to make their own choices, in the name of something they call a "house style". I suppose in a way it's understandable, but I would have liked the book to have the Balslev-Olesen image on its cover, and so would Pia herself.

House style is fine - if the publishing house genuinely has one, or a series where all the covers have to fit in. But as I indicated with Luik, where there's a will, there's a way.

I am, by the way, a great fan of Tarkovsky films, and even met his interpreter for his last film "The Sacrifice", filmed on Gotland, Layla Alexander, when working in Stockholm. ("Stalker" was, of course, filmed in Tallinn.)

Yes, the cover that Bloodaxe want will be quite effective, and the image of horses from the end of "Andrei Rublyov" is perfectly in tune with at least one of the poems in the book (and of course with the title itself), but it will give the collection a "feel" that's different from that of the original edition.

Although I like and admire Tarkovsky's films, and I know that Pia is a keen fan of his work, the psychological effect of a Tarkovsky still image on the cover might sidetrack prospective readers into thinking that the book is somehow about Tarkovsky, which it certainly isn't.

You have a valid point that propping up translated Danish poetry on the fame of an illustrious Russian, can have deleterious effects, distracting or misleading the potential reader, when they are thumbing through the collection in the bookshop.

As you, David, are a translator from Russian, have you discovered his father Arseni Tarkovsky's poetry, used in one or two of son Andrei's films? In a bout of enthusiasm, I once bought a fascinating-looking book about Arseni Tarkovsky and the whole Tarkovsky clan, but never read it, as my Russian is too weak. The book is called "Arseni Tarkovsky - zhizn' sem'yi i istoriya roda", by P. D. Volkova, Podkova (publishers), 2002.

Arseni Tarkovsky was a prodigious translator of poetry from various languages including Georgian, Armenian, Turkmen, early Arabic, and Polish.

I guess I'm not enough of a Tarkovsky fan to have spent a lot of time with the writings of Arseni - though I know that translations of his work are quite popular in Scandinavia. Tua Forsström refers to his poetry in several places in her poems.

You can read all of Arseni's poetry online, at
this website.

I've always viewed Andrei as a gifted figure who in a sense aspired to do what Brodsky actually achieved - span East and West, and merge Russian culture with Western ideas and thought - but with less success. For me, Andrei Tarkovsky relies too much on dramatic imagery and not enough on the intellectual and metaphysical searching that's characteristic of his father. I also think T.'s films are more popular among Western audiences than they are in his native Russia.

Incidentally, Pia Tafdrup does not consider herself to be a Danish poet, but rather a post who happens to write in Danish.