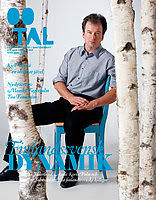 This is significant because Finland-Swedish literature has always had more of a reputation as a literature where poets abound. Even short stories were part of the canon, but Finland-Swedes often used to complain that they had no real novelists. The situation has changed gradually over time, but it is nevertheless encouraging that Kjell Westö (pictured) and Monika Fagerholm will be adding Finland-Swedish novels to the pile this year. There will also be recent poetry by Tua Forsström.

Another interesting feature in this issue is a questionnaire where major Swedish authors are asked about their favourite Finland-Swedish writer. And Merete Mazzarella describes the breakthrough of radical prose.

See also in this blog: The book harvest
Posted by Eric Dickens at 14:21

>>According to various claims on the internet

I've amended my original text and this comment about Sweden's ignoring this theme issue. It was Finland-Swedish literature as a whole that was meant, rather than this particular issue, as I suggested. But I suppose that "Sverige stänger för sommaren" as usual, so maybe all the critics are off on holiday in any case. But I'm sure word will spread.

What I find particularly encouraging is that 00-tal is asking rikssvenska (i.e. Sweden-Swedish) writers to choose their Finland-Swedish favourites. This brings hurrarna (slang for the Finland-Swedes) back into the literary loop or fold.

00-tal is in my good books because they (i.e. the editor Madeleine Grive) have taken Mare Kandre seriously and have had two theme issues on her. They also published an English translation I made of an Elo Viiding poem.

So I really do hope that Finland-Swedish literature will now go through a phase of being avidly examined and read in Sweden. The Swedish publishing houses Alfabeta and especially Atlantis always keep a weather eye out for Finland-Swedish authors. With Atlantis, the new head Peter Luthersson is keeping the traditiona alive started by Kjell Peterson.