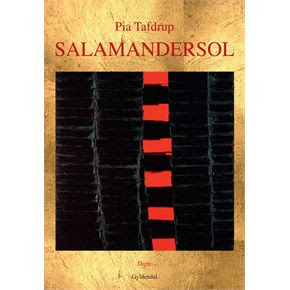 Salamandersol, Pia Tafdrup's latest collection of poetry, contains one poem for each year of the poet's life. Here's a translation of the first poem.

First is joy,
smuggled across the border
through a narrow tunnel.
The night is over, drowned in the sea
buried in the ground,
thousands of years passed alone.
Smells that already existed,
closely surround,
horses snort in the barn.
Wake with light,
see shadow-play on the wallpaper
hear birds in bushes and ivy.
The  grown-ups’ voices and laughter,
a safe landing place
on the other side of the wall.
First is the morning garden
in sun,
its illumination of the heart.
Apples fall in the warm grass,
insects rise
up from flowers’ petal depth.
First is openness,
that soon closes,
faceless.
First is trust,
that is easily swallowed
by galactic fear.
First is  joy,
that newborn flows
towards the world, dreams it.
Then follows grief, then follows anger,
then someone says:
–  Peace be with it.
Life is death that is coming,
but first is joy.

The Beggar and the Hare 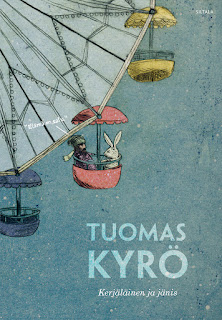 Tuomas Kyrö's novel Kerjäläinen ja jänis (The Beggar and the Hare, 2011) is at once a homage to the better-known book by Arto Paasilinna, Jäniksen vuosi (The Year of the Hare, 1977), and an affectionate pastiche of it. Kyrö takes the theme of "man and animal" and turns it into a satire on the life of modern Finland, with its uncertain position between an affluent and introspective Scandinavia and an impoverished but outward-bound Eastern Europe. The novel's great virtue lies in its author's ability to go further and convert this local drama into a human comedy, where elements of social and political strife become part of a universal moral tale.

Here's an excerpt from the early part of the book, in my translation:

Yegor Kugar was a professional in the security sector whose career began in the Union of Soviet Socialist Republics. Later on the artificial Union filed for bankruptcy, but that change of affairs had no effect on Yegor Kugar’s life and deeds – at least not of a negative kind. Regimes may fall, but the security police remains. The security police is the regime. From Kugar’s professional point of view the nosedive of the Bolshies was actually a positive event, one that improved the state of the markets. Unstable domestic politics and power vacuums always mean brilliant new opportunities for those with no shortage of nerve and testosterone.

“I brought the poppy flowers of the mullahs to the nouveau-riches of my own land. A briefcase full of opium, several briefcases full of banknotes. Our kind of agricultural subsidy. That way the level of my income rather swiftly reached that of my clients. I bought a Nokia mobile phone the size of a beer-crate but couldn’t use it to call anyone, as there weren’t any network towers in our neck of the woods yet.”

At first Yegor sold sackfuls of poppies, then opium, but having been brought up on the street he soon realized that the longer a small businessman works up his raw stock the fatter his wallet will be. With his takings Yegor Kugar bought what every newly-rich motherfucker throughout the world buys: an outsize four-by-four. It might also suit the tramcar-riding intelligentsia to find out what it feels like to go rolling along in one’s very own bulletproof, family-car-eating Hummer.
Yegor needed a temporary residence for vacations, so he bought a floor of the former Party members’ apartment block. When the heroes of the Great Patriotic War on the floor above complained about the noise, Yegor bought that floor as well and moved the heroes out to the street. In his new home Yegor Kugar celebrated his own ego, the good sides of his time at the summit of world history in the company of presidents, sports stars and the bearded, pointy hat-wearing radicals of the Orthodox Church. An endless shindig, like the one in Yegor’s favourite book The Dirt, which describes the everyday life – or rave-up – of the band Mötley Crüe. For in Yegor’s eyes two beings were superior to all others: Vince Neil and Joseph Stalin. Yegor himself puts it like this:

“I’ll tell you straight, as it’s important if you want to understand my character and don’t just want to stick me in the slammer. I’m mad about fucking. It’s the only way I know to get the shit out of my head when I’m under this goddamn stress all the time. Fucking is better than fighting, no? At first I never did drugs myself because I knew it would immediately bugger the stock records and the sales chain follow-up.
“What’s the alternative? Drinking puts you out of action for several days. It’s better to empty your head with fucking.
“Two weeks of business, two weeks in my pad with Miss Uzbekistan. There are all kinds of broads in the world, of all races, sizes, smells and tastes. There are the Pam Andersons and the Armi Aavikkos, but there are also the junkies, the halfwits and the Alla Pugachovas. There are the semi-uglies who are also hypersexual marvels in an easy-going sort of way. There are the seventeen year-olds who look like women of thirty and there are the forty-seven year-olds who’ve kept their resale value. There are the rump roasts who are bigger and lovelier than the sum of their holes. And there the ones who are just holes, for whom I was equivalent to money, drugs and connections, in other words a hole through which they could sniff coke with NHL hockey players. But fun was always had on both sides, until it got embarrassing, at which point I’d tell the girls to go, and order new ones. It didn’t seem possible that such a life would ever end.
“I just can’t sleep alone, I need someone beside me, it doesn’t matter who it is as long as she has a good body. That’s how it is with the women back home, but over here the ladies have been let into the labour market, they have too many opportunities to let their bodies go and quit wearing makeup.”

Yegor Kugar wanted more serious challenges in his life, and so he expanded his business activities from drugs to arms. A market was offered to him on a plate: hostile armies. The most important thing was that the conflicts were ongoing, that no peace negotiations were started, that the situation did not become normalized. As long as the hostile army was within binocular range and antagonistic, one could trade drugs for arms.

“Shitistan, Blackanistan and blah-blah-blah. I got my supply of happy dust from the tribal warlords, paid cash in Kalashnikovs. Then, just for form’s sake, a little skirmish with the same crew, and at the same time an application to HQ for leave, which was granted of course as I slipped in some powder as a sweetener.
“The problems began when the enemy side began to tighten up their morale. Worst of all were the separatists, read B-league fundamentalists, read clerics. They’re an obstacle to free trade, a bit like your social democracy here. They scared the pants off me, because they weren’t scared of us at all. Kind of like the Finns during the Winter War: let the Russkies bring their millions of tanks, we’ll mow them down with our bows and catapults. In place of fear and flight they had hate and faith. Extremely dangerous. I respected them and despised them. But goddammit, if they’d gained such unlimited power, why on earth did they go on living in caves and ruins? They made threatening videos, took hostages and muttered their holy scripture, though they’d have done  better to make music videos and build swimming pools in their basements with pole dancing, billiard tables and drink cupboards.
“I realized that they didn’t know much about fucking, either. That they could only get it up when they were able to rape someone. Their male cousins.”