Doris Kareva: "In dreams and poetry" 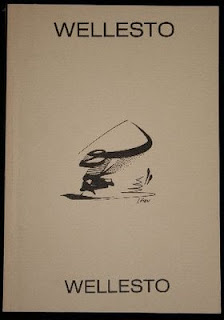 In 1989, as the Soviet Union was crumbling, a number of Estonian poets and prose authors issued an album of work entitled Wellesto. This 150-page album contained, among other things, the work of various Estonian authors who are now famous, but also, for instance, Märt Väljataga's translation of five poems by W.B. Yeats, and Mati Sirkel's translation of a Kafka text, and Kalju Soa's translation of Finnish poems by Ilpo Tiihonen. The imminent escape of Estonia from the Soviet Empire, and 1916 parallels in the case of Yeats, were not lost on Estonian readers. But there were also a couple of translations into foreign languages. One of these was a text, in Pia Tafdrup vein, about the essence of writing poetry by the accomplished Estonian poet Doris Kareva (born 1958) which was translated into both Finnish (Tapio Mäkeläinen) and English (Toomas Hendrik Ilves). Below, Ilves' translation of Kareva's text.

In dreams and poetry

A poem is like a dream – at once a memory and a fantasy; a genuineness that opens up not along the lines of life but the lines of fate; no, not the lot that befalls us, but an eternally present part of the world.

A distant song in the blood: a hymn, a humming, the heart’s rhythm, heard by the child eternally playing alone within us. He raises his head, listens – with the nearing song the ear even distinguishes words – but then it again descends into silence, again on the nether side of response and responsibility. A dream, forgotten before the avenging scourge of consciousness arrives; a letter written in the sand, washed away by the prohibiting tongue of the waves.

Like pearl a poem begins with a grain of sand; the force of inevitability concealed in its self-creation; in it an event no matter how trifling may metamorphose into meaning. The content of a poem is a secret and its form silence. A poem is woven from silence just as an air-thin scarf that effortlessly slips through a ring. A myriad of patterns, signs and ornaments will not change its being; inscrutable as a dream., it reveals only its infinite faces, yet it remains unknown, unfathomable. Yet still, it may strike a lightning-white bridge even between strangers – for often just those separated by gaping worlds hide the same being within.

A poem, a dream, a drug and forgetting still comprise a revelation, an unexpected genuineness, a flight over borders deemed to be real, a recognition, and awakening.

Never, no, never are we more ourselves, never so free and yet fathomlessly alone as in dreams and in poetry – except perhaps in love.
Translated from Estonian by Toomas Hendrik Ilves
Posted by Eric Dickens at 00:17

Thanks, Eric. By the way, is there any chance of a continuation of the "Looming" series you began some time ago?

I'd like to return to "Looming", but I won't be returning to the 1930s just yet. The 1950s were pretty dire. Looking at 1954, there were a couple of things by Byron, but I don't feel you are waiting for my translation of the translation of Mayakovsky's poem on Vladimir Ilyich Lenin, or articles with titles such as "Progressive authors from the capitalist countries in the struggle for peace", and the like.

Especially in the 1970s and 1980s the magazine picked up again. I've just refound annual sets from that latter decade. By 1987, even the subject of Siberia was kosher. Heino Kiik's "Marie in Siberia" was serialised in "Looming".

During the mid-1980s, some younger cultural people started a second Estonian literary magazine called "Vikerkaar" ("Rainbow" - nothing to do with transport for clergymen). This provided the first colour illustrations of contemporary Estonian art, emerging democratic politics, and often had European and American poets in translation. It was printed on lousy paper, but you can forgive this late-Soviet flaw, as it was a minor miracle that the magazine was allowed, by Glavlit, to be started at all.

Sadly, I was so poor during the most of the 1990s and 2000s that I couldn't afford the foreign subscription to these two magazines (much higher than the local one), and only saw sporadic copies. So I have a lot of catching up to do.

Thanks for the historical survey - it's interesting, especially the fact that the 1970s were a period of revival for the magazine.

I'll look forward to reading more about the contents of the 1934 issues when you return to that topic.