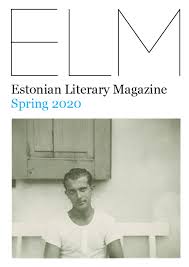 A beautifully produced issue of ELM, the Estonian Literary Magazine, just arrived. Some interesting content, all available online, including interviews with Dutch translators of Jaan Kross, who have their own refreshingly non-academic views on literary translation:

There are many theories of translation, but from what I’ve heard, translators mostly shrug them off in practice and just keep going as they were. Is there any theory of translation or simply a translator’s creed that you hold dear? Did translating Kross put it to the test in any way?

FvN: I’m no theoretician, but I believe the practical summary of translating is an eternal question phrased by the poet and translator Martinus Nijhoff, whom the Netherlands’ most prestigious translation award is named after: “In what kind of Dutch would a foreigner have written their book if they were Dutch and have relied upon in terms of their conceptual form?” One must always keep that question in mind.

JN: Just like Frans, I’m no theoretician. Apart from a few courses on translating Russian literature, I also do not have much formal education in literary translation. I think I learned most while translating The Man Who Spoke Snakish in 2014, for which I received funding and practical help (a mentorship) from the Dutch Foundation for Literature. Since Frans was the only active translator from Estonian at that time, and was more experienced, he served as my mentor. He taught me many things, but most of all, I learned to be more precise. I remember him saying, “What is lost in your first version (or first ‘working’ translation) is most likely lost forever.” I always have that sentence in the back of my mind when I’m translating. And, needless to say, it’s a very important lesson when you’re translating the work and the style of a writer like Jaan Kross.

Posted by David McDuff at 18:10 No comments: