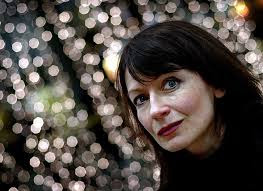 Inger Edelfeldt published a long short-story or short novella called An Uninhabitable House in her 1993 collection of stories called Den förunderliga kameleonten (The Wondrous Chameleon). I am posting my 1996 translation of this work in serial form; part one today. I translated the story, set on Gotland, about a decade before I myself visited the island. As you will see, the story hinges on the fact that two sisters, Carmilla (the narrator) and Sofia share the same soul or consciousness.

My sister and I were conjoined when we were tiny. We had grown in such a way that they could manage to separate us neatly without any great harm being done. The only part of us which remained a little unusual was that we appeared to be sharing the same soul, or consciousness or whatever they call it nowadays. In short: I am completely aware of everything she is thinking and vice-versa. I can even see out through her eyes and hear what she is hearing when we are apart. It's a little like a dream or seeing something in my mind's eye, but I always know when I have tuned in to her wavelength. She cannot escape. Nor can I, for that matter. On the other hand, we cannot influence each other's actions to any great extent, and have to make do with simply registering what the other is thinking and feeling. Sometimes I also pay short visits to the minds of strangers. It's quite simple really, once you get the hang of it.

It's me, Carmilla, who is writing this down; my sister, Sofia, is the more extroverted of the two.

It's about this young man; the young man who Sofia met in the café this morning, while I was still lying asleep at home with a migraine. I mean to say, I intended going to sleep but was in fact lying awake following what was going on. I couldn't actually go there myself, on account of my headache and the heat.

Anyway, Sofia and me have just gone and rented a house on Gotland, in Fridhem near Högklint. We never stay at one and the same place for any length of time. The air here is supposed to be good for you; they're supposed to have had a spa here once. Perhaps the sea air can cure all sorts of diseases, was what we thought.

"Carmilla, I'm going off to the outdoor café to drink some coffee while you're having your rest," said Sofia, and I thought I would be able to sleep undisturbed by worry, since there were only families with children and German tourists out there.

How wrong you can sometimes be! I woke up out of my daydreams to the image of a young man with a most attractive appearance. Sofia had, it seemed, already found an admirer, which is nothing new. You should have seen Sofia! She looked so young, even though she's over thirty. Or perhaps even older than that. Nothing appears to have left its mark on her. She has that sort of pristine beauty which makes men read a lifetime's worth of suppressed desires in her figure. They imagine themselves standing by some mysterious pool in the forest, bathed in gentle, attentive silence, they can smell the fragrance of a new white blossom in the twilight. Ah yes, they seem to hear a clear mating call, as from a herd of white, hornless soulfully staring cattle! There I go again, I really must try to get a grip on myself, I'm not really the type to start making fun of other people's desires. In short: she is to them the personification of truth, the answer to longing so childish and grand that they do not normally wish to acknowledge that it lurks within them. As in all those ballads of Swedish yore: Jungfrun gick till källan... the virgin went down to the well... Hon dansade en sommar... she danced one summer... Kristallen den fina, o crystal so delicate...

I could see all of this reflected in the eyes of the young man. And I saw a good deal else, too, as I lay there beneath the leaden crown of my migraine. I saw that he was one of those types of young men who think that they are old. Who have grown weary of acting the eternally scruffy student. People who bear a burden, almost as if they are pregnant with it, and wonder what they are to do with it, whom they can load it off onto. On his brow were those types of wrinkles you see on the forehead of a young man who believes he is bearing the whole of History within him. Feels himself to be prehistoric: his thoughts rooted somewhere at the birth of the universe. At the other end of his thoughts, this side of History, he now hovers, anchored by the long lifeline of thinking, like an astronaut floating outside his capsule. That isn't anything to joke about either. But it is a little odd, nevertheless; where does this feeling of having been around since the beginning of time come from? Could it be that something inside you continues from life to life. Or is it simply the sum total all the books you have read, all the paintings and films you have seen and all the music you have heard which gives you that feeling of psychic pregnancy?
[to be continued]
Translated from Swedish by Eric Dickens
Posted by Eric Dickens at 10:54