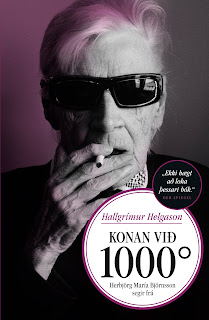 It’s about Herra Björnsson, an eighty-year-old Icelandic woman, who was the granddaughter of the first president of Iceland. She was born in 1929 and grew up on the Breiðafjörður islands. Her father was among the few Icelanders who fought on Hitler’s side in WW2. Her life was very much affected by this fact, and during the war she was left alone, a young girl roaming around Germany. You can say she never recovered from this experience.

After the war she goes from here to there, has many husbands and lives all over the place. She then ends up bedridden, in a garage in Reykjavík, where she spends her last years living alone with a laptop and an old German hand grenade, her sole souvenir from a turbulent life. The book plays out in the present, with her in the garage, doing her tricks on Facebook and such, but also in the past, as she looks back on her eventful life. The novel is very much Herra’s life story, peppered with some eighty years of North European and Icelandic history. It’s very tragic at times, but funny as well, I hope.


There are some chapters from the new novel in my translation, here.
Posted by David McDuff at 10:48 2 comments: