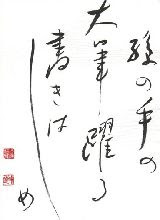 For some reason which may be connected with a northern liking for taciturn concision, the modern Japanese verse form known as haiku is often encountered in the work of Nordic poets. Here are some Swedish examples. And here are some haiku by the Estonian poet Andres Ehin. The trick for the translator is to observe the 17-syllable rule (not always easy to follow when the poems migrate to English). I tried my hand at this poem from Pia Tafdrup's haiku collection Boomerang:
Tærsklen til døden:
Månemørkt indre rige
-- passagers lysflod.
The threshold of death:
Moon-dark inner kingdom
-- lightflood of passages.
No, it's definitely not as easy as it looks, and somehow the English versions never look quite as "compressed" as the originals.
Posted by David McDuff at 09:21

When I was a student at Edinburgh University in the 60s there was a local poet called Alan Jackson who published a slim volume of his "haikus". I think it was the first time I'd come across the term. One poem that has always stuck in my mind was called "The Young Politician", and it goes: "What a lovely, lovely moon, / And it's in the constituency too!"

I seem to remember that Eric recently posted a comment on the World Literature Forum about the desirability of translators of poetry emulating as far as possible the metrical and other stylistic features of the original poem. I was reminded of this when I came across the following passage in a translation of the Icelandic poet Jónas Hallgrímsson's "Grasaferð" (Gathering Highland Moss) on the excellent University of Wisconsin-Madison website dedicated to this writer. The translation is by Dick Ringler.

A boy of 13 has been sent out to gather moss with his 15-year-old 1st cousin Hildur, who is also his foster-sister (well, it is an Icelandic story after all!). The boy fancies himself as a poet and translator, and as an orphaned, rather self-pitying adolescent, he has been impressed by a poem about an orphaned, self-pitying adolescent by the Danish poet Adam Oehlenschläger. His cousin/sister is less than impressed by his rendering:

"I know that poem," said my sister, "and you haven't done a very good job translating it. You shouldn't have used fornyrðislag, for one thing, and --- "

"But there was no other way to do it!" I said with a good deal of warmth, totally losing my composure. "If I had tried to get the meaning across and keep the original meter at the same time, I'd have made a terrible botch of it! And anyway --- how did you know it was my translation?"

"Well, you just said so yourself," she replied smiling. "But coming back to what you were trying to say a moment ago, I think a skilled translator could have preserved both the content and the form of the original. When you transpose a poem into a different form, it usually takes on a very different character, even when the content remains the same. There's no question but that this particular poem has lost a lot of its strength, I can't exactly say why. There's a kind of sweet, childlike melancholy about the original --- and that's what I miss so much in your translation, cousin. You're setting your sights a little too high, I think, trying to translate poetry of this caliber."

It may seem rather unlikely that a 13-year-old and a 15-year-old would have such a learned discussion about poetic metres, but there again this seems to be an Icelandic trait (see the novels of Halldór Laxness, passim).

Well, Harry, translating poetry is the art of the impossible. :-)

Joseph Brodsky (who knew Iceland a bit) used to say that the translator should throw away the text of the poem before writing the translation. In his opinion that was the only way one could hope to create another poem that would come anywhere near the original.

The haiku form is interesting, though, and possibly unique as a translation exercise.

I must say that Brodsky, as opposed to the foster-sister, does seem to have a rather despairing attitude to the translation of poetry. But he was brought up in the Russian tradition where rhyme is more prevalent. I find some of the Finland-Swedes I attempt to translate are relatively easy to catch. There is no rhyme; you can often get roughly the same number of syllables for the feel of it; and so you can get the rhythm; and the meaning is reasonably straightforward. But here I'm talking about the von Wright, Stürmer and Wichman I've done. Eva-Stina Byggmästar is a whole new ball game, and Brodsky could well be right about her: throw away the original and start again. Because punnery and other word play are almost impossible to translate without ending up knee-deep in doggerel.

Brodsky might have liked machine translation. In Eva-Stina Byggmästar's case, you might as well use the Google translation engine. Take her highly punny-alliterative poem from another thread here:

Google's robot-brained machine makes this of it:

Is relief of lime!
Is maple tray in maple!
But let the dogs play
that they are hiding in the sparse
hole. Let them travel,
let them stand ajar
against everything that glindrar,
shine, shines, glimpses.

It's a pity that Joseph died before any of this became possible. He might have had a lot to say about it...