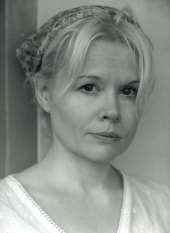 on this blog. Here follows an excerpt from her novel Quinnan och Dr Dreuf (The Woman and Dr Dreuf; 1994) which has already appeared in French and Estonian translation.

Dreuf, an anagram of Freud, is a dwarfish psychoanalyst-misogynist whose dusty surgery is the stage for the duel between himself and one of his female patients.

The two excerpts are taken from the beginning of the novel where Dreuf still assumes that he will maintain the upper hand. It is still in my draft version, so nothing is set in stone. But the mere vocabulary, style and typographical shape of the page will already afford sufficient insights as to where this novel is going. The indents are not possible to reproduce here, but it can be seen that the lines are jagged, like poetry. The whole text is humorous, ironic, and there is an element of self irony on the part of the female side of this duel too, so that it is not a black-and-white agit-prop feminist text, but more of a gentle spoof of both protagonists, plus the shabby cleaner who goes by the name of Mrs Nahkurs, an Estonian word implying skin (and bones?) and tanning. The style and line-breaks continue throughout this 150-page novel.

There was an article a few days ago in the main Swedish daily Dagens Nyheter about Mare Kandre, announcing a recently produced television film by Johan von Sydow about her life and works.

Thanks, Eric, that's interesting. Is there a particular reason for the typographical layout of the text, I wonder? 150 pages is quite a demanding length for a visual device of this kind, but perhaps one gets used to it when reading.

I've inserted the link to the DN article.

I quite agree that once a gimmick wears thin, it obstructs, rather than enhances. But I feel that it works in this instance. There is not too much dodging all over the place, just the curtailment of lines. The Estonian translation kept the same line breaks, and it works there too. But as said, there are indents too, which I can't find out how to reproduce here. I don't know the HTML tab code.

Principally, this technique means that if things are listed, you can see the list clearly and discretely as you descend the page. And one of Kandre's techniques is little lists.

Kandre did not use this typography for all her novels. She started out with prose poetry, moved on to the shape of the page here for three books, but also wrote her novels "Aliide, Aliide", "Bestiarium" and "Xavier", plus the stories in "Hetta och vitt", in normal prose.

It's possible to post pre-formatted text (showing spaces, indents and so on) using the HTML "pre" tag in the HTML editor - I've done it with a poem by Pia Tafdrup, for example, and it worked more or less ok, except that the text is printed in Courier instead of the default font for the blog. It's easy to do - you just insert a "pre" tag at the start of the text, then type the text with tabs and spaces and indents, and then close it off with a "/pre" tag.