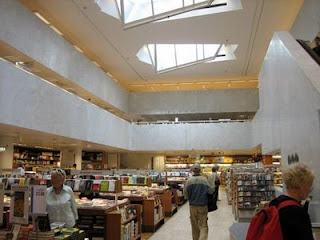 If you're looking for a source of books in Finnish, Finland-Swedish or Swedish, Helsinki's Academic Bookstore (Akateeminen Kirjakauppa/Akademiska Bokhandeln) is hard to beat. Since 1969 the store, which was founded in 1893, has been housed in one of the most highly regarded interiors by Finnish architect Alvar Aalto, next door to the Stockmann department store on the corner of Keskuskatu and Aleksanterinkatu, of which it now forms part. There is also a large English-language section. The sales and display area is constructed in the form of a three-level piazza, lit by geometric crystalline glass skylights and surrounded by white marble, and a visit is also an architectural experience. There are two cafés, including the famous Café Aalto, which makes its own sandwiches and cakes, and has table service.

The Academic Bookstore has an efficient mail order department, and will ship books overseas. However, the website's mail order facility is intended for use within Finland only -- ordering from abroad needs to be done by email, which should be sent to tilaukset@akateeminen.com.
Posted by David McDuff at 08:58

I have pleasant memories of the Academic bookstore, which I visited on numerous occasions during my sojourn in Finland during the 1970s. Even then they had a small café in the Aalto building, on the balcony at the far end of the photo, as above. This must have been one of the first bookshop cafés in Europe. Their mail order service was in place then, too.

I bought my first Mati Unt book there, "Sügisball" (Autumn Ball; 1977) shortly after it first came out. As I have now translated two of his other novels, this was the start of something I had no inkling about at the time.

They used to have quite a good Russian section, which will, no doubt, have expanded now there are many more Russians living in Finland than then. And their literary magazine section was convenient.

There wasn't much sign of a Russian section when I last visited the store - though admittedly that was a couple of years ago. And the Estonian section was tiny, containing only about a dozen or so books. There was a fairly decent selection of recent titles in French, however, and the German section was also quite well-stocked.

Yes, the Café Aalto on the second floor has been there right from the start, I believe.

When I first visited, there were stacks full of Russian books at Akateeminen. In those days there were only a couple of dozen Estonian books. Books were dirt-cheap in the ESSR, so few people wanted to buy them in Helsinki at inflated prices. But the Russian shelves also stocked things unavailable in Russia.

Now that there are many Russian expats, there is a specialist Russian bookshop in Helsinki, called Ruslania, at Lapinlahdenkatu / Lappviksgatan 1C. It also has an internet bookshop service.

I remember sitting in that Akateeminen café several times during the 1970s, drinking coffee and looking down over the ground-floor display. Even then, they had a good selection of English, French and German books. Plus some rikssvenska ones beyond home-grown books in Swedish.