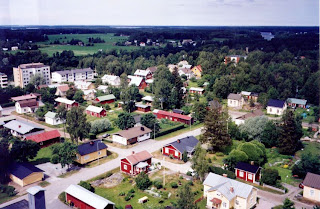 Nykarleby (Uusikaarlepyy) is a pleasant small town to the south of Jakobstad in Ostrobothnia, Finland. As you can see from the aerial photo, it is set in quite wooded countryside on flat plain of what locals mockingly call the Pampas. Most buildings are mercifully low-rise. The town has one of the highest percentages of Swedish-speakers of anywhere in mainland Finland. Only Åland competes on this score.

What is strange about this little town, which even now has no more than about 7,400 inhabitants, is that a disproportionately large number of Finland-Swedish poets, and some prose authors, were born there, or close by. Plus some who spent most of their lives there or wrote poems about it. Here is a list of some of them:

Several poems by each of the authors with an asterisk after them are included in an anthology of some 300 poems called Facklor över jorden - lyrik (Torches Over the Earth - Poetry ), compiled by Thomas Warburton, who is described on another thread here. It was published in 1959 in the excellent "Finlandssvenskt bibliotek" series. I shall be translating selected poems from this book and posting them up here in due course on new threads.

The Warburton anthology even contains early poems by Gösta Ågren, who is still an active poet. A selection of Ågren's poems, entitled A Valley in the Midst of Violence, was translated by David McDuff and published by Bloodaxe Books in 1992.

Looking at the number of names, it seems strange that so many Finland-Swedish poets who have made it into print, and sometimes gone on to fame in Sweden as well, were all connected with this small provincial town in Ostrobothnia. Sometimes nodes of culture arise.

Those who are able to read Swedish can look here.