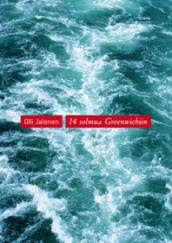 Finnish author Olli Jalonen's latest novel, 14 solmua Greenwichiin (14 Knots to Greenwich, Otava, 2008), which centres on the story of a fictional round-the-world race by land and sea that starts in Greenwich, England, has occasioned a considerable amount of interest in Finnish literary, reading and media circles. The book is the product of nearly 20 years' work, and moves between suspense fiction and autobiography in an unusual and often enigmatic way. The Finnish literary critic Jarmo Papinniemi has interviewed Jalonen for the literary magazine Parnasso, of which he is editor-in-chief, and I'm offering an English translation of the text here. In future posts I'll present a few excerpts from the novel itself.

Some ideas ferment for a long time, metamorphosing and sometimes making room for new ones before they finally reach completion.

The idea for a novel in which people travel round the world along the same meridian came to Olli Jalonen in the autumn of 1989. The novel Johan ja Johan (‘Johan and Johan’) the most important book in his career thus far, was finished, and Jalonen set off on a long-planned journey to the island of St Helena. There, almost on the Greenwich meridian, the novel it took him until 2008 to complete began to germinate.

“I was in a total vacuum down there,” Jalonen says, recalling the atmosphere on the island, which he reached by mail ship after months of queuing. The distance to the coast of Africa was almost 3,000 kilometres, and one had to wait hours for an international telephone connection. In the finished novel, 14 solmua Greenwichiin (‘14 knots to Greenwich’), one can still sense the atmosphere he experienced on St Helena, one that is remarkably foreign to the modern individual: the sense of being well and truly cut off from the rest of the world, without the contact with people and events in far-off places that is created by technological gadgets.

The original idea for the novel that was born on St Helena was fairly similar to the finished work: which tells the story of a journey right round the world. To this an extra element was added, that of a race.

“But if I’d written it right away then it would probably have been very different, both from the point of view of technology and in relation to virtual reality,” Jalonen says.

Indeed, within the space of a few decades the world has indeed changed. Information technology has developed at an exponential rate, and the approach to “reality” in the competitions that are shown on television is growing increasingly strange. In the new novel, too, an essential feature of the race is the fact that the events are reported to the viewers in the form the organisers choose themselves.

The manipulation of reality is not exclusive to the results of reality shows, Jalonen believes. Many elections are simply illusionary. And what about the world’s most expensive circus? “At one time I had this idea about Formula One racing – what if it it’s all planned beforehand in the spring? What if all those popping engines are pre-programmed on a computer, to make the season sufficiently dramatic?”

But the novel’s central idea really goes a good deal further than exposing the scores achieved on “Idols” as a hoax. The reasons that drive the characters to travel round the world along a straight line are much more pressing.

“It was important for me to depict what the world is like now, by means of this ‘slice’ of it, whatever it may bring with it. While I was writing the book I noticed how the different parts of the world are joined up together. I’d had no idea what Transnistria or Abkhazia were like, but when I studied them I could see the huge amount of smuggling and people trafficking that goes on there. Or my old love, North Korea, where during the Soviet era there were slave camps so that the state could offer the Soviet Union lumbermen for labour in the forests.”

“ It’s a huge system that spans the entire globe, and it’s not at all what we see it as or think it is. It’s somehow terrifying. Here in Finland we’re relatively protected from it.”

While Jalonen was in the middle of the book he wrote many passages about the trade in human beings and identities. After a while, however, this began to seem too much like a repetition of material from newspapers, and he decided to give the subject less priority. “Otherwise it would all have had a cut-and-paste look,” he explains. This avoidance of cut-and-paste is also something he mentions when the talk turns to ecology and climate change. While he was doing background research for the novel it became obvious to him that the glaciers were melting and sea-levels rising, but he didn’t want to devote too much space to a topic that was already familiar from the media.

Instead, the space is given to people. There are four central characters: the British couple Graham and Isla, their old Finnish friend from student days Petr, and Petr’s younger brother Kari, who joins the group later. Their task is to travel round the world using the methods that would have been available in the eighteenth century – mainly hiking and sailing. Modern airships help them to cross the worst of the deserts and glaciers.

Now and then the characters are gripped by a distinct tension which varies in intensity, but to which they don’t refer in their conversations. The reader’s task is to make guesses by interpreting small hints.

“The tone of the novel became so reserved because they were at Cambridge together,” Jalonen explains. “Matters are discussed with a maximum of British understatement. No emotions are allowed to surface. When something explosive is in the offing, it has to be snuffed out.”

“But it’s also true that this tone becomes mainly that of the author himself. I would have difficulty in producing one of those swashbuckling narratives à la Heikki Turunen,” Jalonen laughs. “I suppose one can’t alter one’s literary footprint.”

It is typical of Jalonen that his characters feel themselves to be alone in the world. Each of them walks under a starry sky of his or her own.

The four characters in the Greenwich novel are given a computer to take with them on their journey. Although it can’t be used for general communication, the race organizers tell them it will be used to issue them with instructions.

On page 100 of the book, the journey has just begun. Petr broods. “What if the instructions and messages stop arriving on the screen? Then we’ll just have been pushed into action and after the push we’ll be left on our own.” One can speak of existential anxiety. “There’s probably been a kind of basic loneliness in my books from the very beginning,” Jalonen admits. “If I tried to abandon it, that would be artificial. It just always comes in.”

For the travellers, the computer has the status of a kind of altar: with it and only with it can they communicate with the higher powers that are directing the journey. Each one develops a kind of theology: some are more sceptical, others are steadfast in their faith.

For Jalonen this dimension is an important one. It is certainly no accident that the characters are natural scientists and that the model for the race is Edmond Halley, the explorer and scientist who lived in the Age of Enlightenment. Jalonen believes that our own time, regarded as the direct heir of the Enlightenment that emphasised knowledge, uses the inheritance in the wrong way. Natural science has been given omnipotent status.

“Science has grown arrogant. It says that this is all there is, that we know it all. But you don’t need much brains to realize that in twenty years’ time the absolute truths of today may look like ridiculous, kindergarten stuff.”

On top of everything else, 14 Knots to Greenwich is a novel with a plot. Its narrative has twists and turns, and an exciting ending, and the entire story can quite easily be compressed into a single sentence. This is not what we are used to from Olli Jalonen. He says that his ideas about writing have changed.

“Back in the 1980s I would be quite satisfied if I could produce a sentence that was 45 pages long. But I’ve changed – I want my writing to communicate more,” he says. “Of course I’m still very fond of reading Joyce, but that isn’t really reflected in this book, it wouldn’t have suited the context.”

Yet this book too has its “Joyce amulets”, as Jalonen calls them. He has written these “amulets” into all of his books: they are texts which either directly originate in James Joyce or evoke him by memory or allusion.

“I came across Joyce when I was quite young – sixteen, maybe. At the time I was mainly reading thriller and crime writers like Alistair McLean and Mauri Sariola, but one day I happened to take Joyce’s short stories out of the library. I found them really interesting, quite different from Sariola’s...”

“Later when I began to write I noticed that I sometimes produced things in the text I felt were not ‘me’. I realized that they were actually from Joyce. They were bits I’d remembered from my reading of him.”

Other authors who later became important to Jalonen included Heinrich Böll, Michel Tournier and J.M. Coetzee. And Väinö Linna, whose work he first got to know through the 1960s Finnish radio adaptation of his war novel Tuntematon sotilas (The Unknown Soldier, 1955). “I remember its frighteningly powerful images.”

That a powerful image can be very small is something Jalonen has learned from Coetzee.

“Coetzee led me to write on a smaller scale. When I read his The Life and Times of Michael K. it was a big change for me. That book ends with someone drawing water from the earth with a tiny spoon. A small thing like that can contain everything, as long as it’s done clearly and thoroughly, in a dignified way.

“The lives of Coetzee’s characters are often small and wretched, but those characters always have dignity and a sense of humanity.”